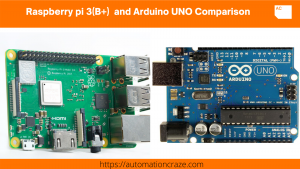 Hmm. So you are on the right path. This is an era of automation, robotics, and IoT (Internet of Things). For this purpose, you can use custom build gadgets & tools like “Amazon Alexa” , “Google Assistant” , “Phillips Hue” , “LG Smart tv” etc. If you are interested in doing some automation stuff by yourself, Arduino and Raspberry are best for you. These can be the heart of your automation system. Few other boards are also available like ESP8266 and NodeMCU, but in this article, I shall only focus on Arduino and Raspberry Pi.

Here, I shall discuss the difference between Arduino and Raspberry Pi in a straightforward way. After reading this article, you will be able to choose the best hardware for your job.

Actually, both (Raspberry & Arduino) are quite different in use and customization.

Note:  This article will focus on Raspberry pi3 (B+) and Arduino UNO.

Arduino is basically a microcontroller based electronic platform that is open source. It was developed to do interactive projects by Arduino. cc

Raspberry pi is a kind of minicomputer developed by the pi organization. It was developed to teach computer programming in developing countries. By default, its operating system is Raspbian based, but you can even other operating systems like Android, Windows 10, and Firefox.

As Arduino is a microcontroller, it is very quick in performing different operations on small devices like Led, motors, and other sensors.

Raspberry Pi is Single Board Computer (SBC) having an operating system installed on it. It is suitable for large complex tasks.

Arduino board has many variations. Notable are Arduino UNO, Arduino Mega, Arduino Due, Arduino Leonardo, etc. There are changes in hardware but programming is essentially the same. 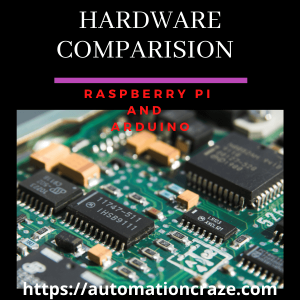 In Arduino and Raspberry Pi comparison, one important aspect is Hardware Structure. Due to its ultimate importance, it is drafted in form of table.

Arduino operated on 5V while Raspberry Pi is operated on 3.3V(5V can damage GPIO pins permanently).

Sensor interfacing is comparatively very easy in case of Arduino.

In the case of Raspberry pi, sensor and components interfacing is relatively difficult because it requires related libraries and software installations.

Arduino cannot be connected to the internet directly (You need external hardware to connect Arduino with the internet).

Raspberry pi can be connected to the internet easily via built-in Wifi or Ethernet port.

Arduino has no operating system. It has an integrated Development Environment.

Raspberry pi is UNIX based so it can use anything like Scratch, Python, IDLE etc

When we think about programming languages of Arduino and Raspberry Pi, below are important points.

The recommended programming language for Arduino IDE is C/C++.

The officially recommended language for raspberry pi is Python but C/C++ and Python Ruby can also be used.

Arduino starts running as it is powered up through a jack or PC USB. You need to unplug the power to turn Arduino OFF. It means power interruption does not damage the Arduino Program.

Raspberry Pi required proper shutdown technique as in the case of our normal PC otherwise, files can be corrupted. It means Power Interruption can damage the Operating System of Raspberry pi

Arduino UNO is very cheap as compare to Raspberry Pi. In Pakistan, Arduino cost about PKR 500 and Raspberry pi 3 Model B+ about 4000PKR.

You cannot upload heavy multiple programs on Arduino due to its low onboard storage. It has 32Kb of onboard storage capacity, which is used for storing code.

In raspberry pi you can use up to 64GB memory card(Which is more than enough in most cases).

Arduino doesn’t have a built-in blue tooth module. If you want to attach a Bluetooth with it, you need to use external hardware called a shield.

In Arduino, data transfer is done through the flash of the microcontroller.

In raspberry pi data transfer is possible with SD Card, USB or FTP.

The maximum current capacity for both Arduino and Raspberry Pi is 50mA.

Arduino has only 2 Kb RAM capacities while Raspberry pi 3 Model B+ has 1 GB RAM.

Now all the above points show the difference between Arduino and Raspberry Pi. Both have their own Prons and Corns. Selecting one of them for your job fully depends upon the nature of your job.

Raspberry pi is useful for complex programs and multitasking.

Some examples are given below.

iii) Temperature and Humidity sensors to turn HVAC System ON or OFF.